By Kurt Rouser
It may seem like a stretch to think that engineering and Christianity be related, or even compatible. I propose that God is the ultimate engineer of creation, salvation, and the Church, and that there is agreement between fundamental Lutheran theology and basic science, technology, engineering, and mathematics. My message as a Christian and professor of mechanical and aerospace engineering is that you don't have to check your faith at the door to the realm of science!

I once had lunch with an engineer colleague and close friend, and I asked the point-blank question, "Do you believe there is a God?" His answer surprised me. He said that the complexity of nature was evidence enough for him that there is indeed a God. However, he was convinced that he was not going to heaven because he could not measure up to God's standards. Wow! He already felt the weight of the Law, so he was certainly prepared to hear the Gospel! I promise to tell you how I responded to my friend later in this article, showing how God can work through our vocations or callings to reach the lost.
My friend confirmed what the apostle Paul says in Romans 1:19-20, that "what can be known about God is plain to them, because God has shown it to them. For His invisible attributes, namely, His eternal power and divine nature, have been clearly perceived, ever since the creation of the world, in the things that have been made."
The fine-tuned, irreducible complexity of God's design is evident in the visible aspects of nature, as well as in the invisible revealed by mathematics.  Just consider the equilibrium (state of balance) of celestial bodies. Or consider the complexity and order of information contained in the human genome (our complete set of DNA). In the realm of mathematics, look into the Mandelbrot Set of complex numbers (real and imaginary) here to see the infinite nature of God in fractal patterns it generates. Notice the repetition of those patterns the more you zoom into any portion of the fractal. You'll see the same result in the Julia Set fractal image below. 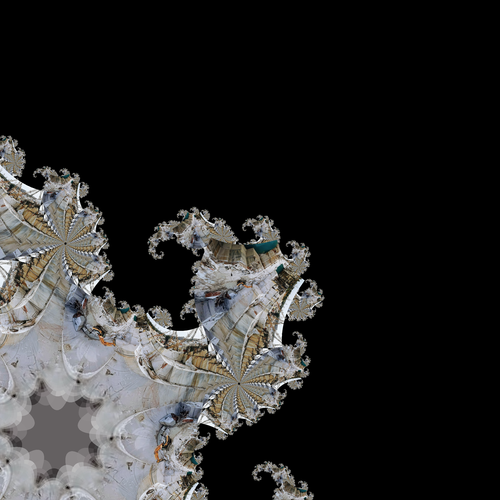 For comparison, in my engineering field, consider the design of a jet engine, which you can check out here. I'm about to use some technical language, but you'll see that you don't need to have a grasp of what each and every term means to get my main point. There is a delicate equilibrium and complexity in the mechanical and aerodynamic forces of the rotating turbomachinery, as well as in the chemical kinetics of combustion necessary to avoid a compressor stall, combustor flame-out, or catastrophic turbine structural failure. The rotating blades have a particular airfoil shape, spacing, span, taper, twist, and angular speed. It is simply not reasonable to look at a jet engine and think of an incredible coincidence of random natural events that could result in the assembly of such a complex, fine-tuned machine. How much more unreasonable is it to look at something as complex as the human body and conclude that it is the product of random natural phenomena?
If God has made His existence and attributes obvious in natural creation, why doesn't everyone believe in Him? The answer lies in Romans 1:21-23, ". . .they became futile in their thinking, and their foolish hearts were darkened. Claiming to be wise, they became fools. . ." Do not compromise your faith because of the futile thinking of some "wise" scientists, engineers, or mathematicians! Trust in God's design for your life and salvation.

Now, back to the story of my friend who believed in God but had no hope of salvation. He had the natural knowledge of God (natural revelation) but lacked the knowledge of God revealed in the Bible (special revelation). So, how did I respond? I simply told him the story of salvation, starting with Genesis--always pointing to the crucified and risen Christ. As an engineer, he appreciated the simplicity, complexities, and consistency of God's design of salvation. So, God worked through my vocation as an engineer to share the Gospel!
In Genesis, God promised salvation and revealed the means of His saving work, beginning with Adam and Eve, for whom He crafted garments of animal skin to cover their sin. This was the first spilling of blood to atone for sin, pointing to the need for a perfect blood sacrifice for the entire world, for all time, to cover all sin. God then used water to cleanse the world of sin, saving Noah and his family through the Flood, consistent with God's use of Baptism as a means of grace. Later, God saved Israel through the Passover blood sacrifice and through the waters of the Red Sea, again pointing to the means of grace.
One of my favorite Old Testament stories to illustrate God's design for redemption is in the book of Ruth. For starters, the setting is in Bethlehem, which means "House of Bread"; more than a coincidence with the element in Holy Communion. In fact, the number of seeming "coincidences'' in the story is very striking. The story begins with a famine in Bethlehem which motivates Elimelech to journey with his family to a foreign land, where his sons marry Ruth and Orpah.  After ten years, Elimelech and his sons die, leaving Ruth and Orpah destitute with their mother-in-law, Naomi, and compelling a return to Bethlehem, which in the meantime has recovered from the famine. Orpah did not go with Naomi, but Ruth clung to Naomi and her God.  In another apparent coincidence, Ruth gleans grain in the field of Boaz, who happens to be a kinsman redeemer. (Note: In Biblical times, a kinsman redeemer was a male relative who would step in to help his relative in need, restoring his or her standing in the community--sometimes at great cost to the redeemer.) At night, on the threshing floor, Boaz covers Ruth with the "wings" of his garment, hearkening to Adam and Eve's animal skin coverings. Ultimately, Boaz redeems and marries Ruth, restoring Naomi and providing an heir, Obed, who was the grandfather of King David. It is because Mary and Joseph were descendants of David that they travelled for the census to Bethlehem, David's hometown, where Mary gave birth to Christ in fulfillment of Old Testament prophecy.
The number of seeming complex coincidences from Genesis through the Book of Ruth and extending through the New Testament Gospels make it unreasonable to ignore the obvious design for redemption that God worked over thousands of years. Furthermore, He consistently uses simple means of grace through water, bread, and wine to connect us today across time and space with the Baptism, and the Body and Blood of Christ. Consider also how the miracles of Christ reveal the re-creative work of God, restoring hearing, sight, and life through faith. God is indeed the ultimate engineer in His work of designing, creating and re-creating!

Watermarked by Design to Bear Witness

God does not hide His design or timing of salvation, but reveals it in simple words like those of Romans 5:6-15: "For while we were still weak, at the right time, Christ died for the ungodly." He even makes clear the means of salvation in Scripture, such as Romans 6:3-4: "Do you not know that all of us who have been baptized into Christ Jesus were baptized into His death? We were buried therefore with Him by baptism into death, in order that, just as Christ was raised from the dead by the glory of the Father, we too might walk in newness of life." We are therefore watermarked to be a witness of God's design of salvation. Cling to His Word and Sacrament, firm in faith, knowing that you are part of His incredible design.
The Juliet Set fractal image was created by Katie Hill (HT managing editor) using an online fractal generator to transform HT's Digging Deeper graphic.
Dr. Kurt Rouser is Assistant Professor of Mechanical and Aerospace Engineering at Oklahoma State University (OSU). He graduated from the Air Force Academy in 1995 with a Bachelor of Science in Aeronautical Engineering. He has served as an elder in multiple congregations across the country while on active duty and continues at St Paul Lutheran Church in Wellston, Oklahoma, where he attends with his wife and seven children. He has been involved in various campus ministries and is currently a part of the Fellowship of Christian Faculty and Staff at OSU.
Posted in Digging Deeper
Tagged with engineering, science, technology, Passover, Ruth, Boaz, Bethlehem, David, prophecy, watermarked