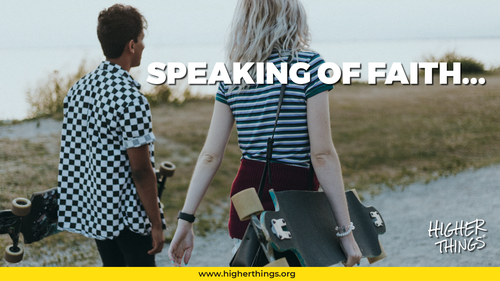 By Bruce Keseman
For the word of the cross is folly to those who are perishing, but to us who are being saved it is the power of God. For it is written,
"I will destroy the wisdom of the wise,
and the discernment of the discerning I will thwart."
Where is the one who is wise? Where is the scribe? Where is the debater of this age? Has not God made foolish the wisdom of the world? For since, in the wisdom of God, the world did not know God through wisdom, it pleased God through the folly of what we preach to save those who believe. For Jews demand signs and Greeks seek wisdom, but we preach Christ crucified, a stumbling block to Jews and folly to Gentiles, but to those who are called, both Jews and Greeks, Christ the power of God and the wisdom of God.  For the foolishness of God is wiser than men, and the weakness of God is stronger than men. (1 Corinthians 1:18-25)

"Jews want signs," Paul tells us. Power. Impressiveness. But what could be weaker, wimpier, and less impressive than a convict drooping dead from a Roman instrument of execution? What could be weaker? How about a damned convict drooping dead from the cross. Anyone hung from a tree is under God's curse, forsaken by the Father. "My God, My God, why have You forsaken Me?" Who would be fool enough to believe in Jesus cursed by His own Father?

Aren't you sometimes a little embarrassed telling people the details of what you really believe? If you stop for supper at a restaurant on the way home tonight, strike up a conversation with the stranger beside you in line. Say, "Hi, I believe that a spirit from outside this universe voluntarily got Himself murdered in this universe so that I can go where He came from. Oh, and I believe a woman who never had sex gave birth to that Spirit on earth so He could be human as well as a spirit." If the guy still hasn't called security yet, and he happens to ask you how Jesus changes your life on earth, you can tell him, "Oh, I get to bear crosses, in other words, I get to suffer for believing in Jesus." No doubt, that'll convince the guy he should believe, too!

The apostles wanted an impressive Jesus. The apostles are Jews. The Jews want signs, power. So when Jesus says He's about to be glorified, the apostles have to be thinking, "Finally! Finally, He's going to put His power on display. He's going to do something that will make us proud." But, nooo, Jesus says He'll be glorified by doing what a good grain of wheat does when the farmer in your congregation plants it in the soil. Jesus will die. With all your ingratitude attached to Him, so it is no longer attached to you. And then He will come out of the soil alive. Because that's what a good grain of wheat does.

In short, if you want to see Jesus in all His power and glory, look at Him writhing in pain on a cross. No wonder the message of the cross is offensive to Jews who want to see impressive signs of power. And, too often, to us as well.

The cross is just as offensive to Greeks who crave wisdom. Jesus' way of salvation sounds downright foolish.

How many of you attend a congregation named "Holy Cross Lutheran Church"? Go home and repaint the sign in front of your building to say, "Holy Lethal Injection Lutheran Church." Everybody, go home and tell your church council you want the brass cross on brass altar replaced with a beautiful brass syringe. In our church chancel, we have a lindenwood carving of Jesus on the cross. Wonder if we can get a craftsman in Italy to sculpt a lindenwood carving of Jesus in front of a firing squad instead. Next time there's a baptism at your church, ask your pastor to make the sign of the holy electric chair both upon the forehead and upon the heart to mark that person as redeemed by Christ the executed.

Sounds absurd. But the cross is nothing else than the first century equivalent of a lethal injection, a firing squad, and an electric chair. You stake your eternity on a ridiculous claim that Christian preachers have been making and Christian believers have been believing for 2000 years: that when some first century Jew got crucified for a capital crime, He was satisfying all God's wrath against every sin of every sinner from Adam until us.

That's preposterous! No wonder the cross is offensive. It's wimpily weak. And imbecilicly foolish.

God's weakness is stronger than man's strength. Jesus draws one last breath. Hangs His head. Gives up His Spirit. And in that moment of pure weakness Jesus accomplishes what all the powers of earth put together could never accomplish. He pulls you out of hell and into heaven. Tetelestai! It is finished. The weakness of the cross is God's power to save you. That's why we believe, no matter how weak it looks.

And the foolishness of the cross is God's wisdom to save you.

Gather all the wisest people in the world. Ask them to solve the world's problems. Give them a week. Give them a year. Give them a decade. They'd come up with hundreds of ideas. Some might be good ideas. But even all of their good ideas put together wouldn't end the suffering in this world.

There's one solution I guarantee those brilliant-mind braintrust wouldn't think of. And neither would our puny minds. No one would suggest that God put His Son onto this planet fully intending to have Him executed. But that's what God did. So it wasn't cute Fluffy who got a Silence-of-the-Lambs treatment. Jesus is the Paschal Lamb sacrificed so that eternal death passes over you—precisely because that death did not pass over Him.

And no human mind would open the cupboard, see a loaf of bread and bottle of wine and think, "I know a good way for God to get His salvation to us otherwise hell-bound people. He could use bread and wine. And He could, like, put in our mouths the body and blood of His Son, the same body and antivenin blood that was crucified 2000 years ago for us snake-bit sinners." That's human silliness. But it's divine wisdom.

When the Holy Spirit uses nothing more than a splash of water that has nothing more attached than God's promise—and nothing less attached—a little baby who can't do anything but scream and poop suddenly possesses wisdom that exceeds all the smartest unbelievers in history. It's a cruciflood! She may not realize she is doing it but like still dripping-from-the-font little Ruth who grabbed her pastor's pectoral cross and hung on for dear life, that child is clinging to Jesus' cross by faith, even if she doesn't realize it. And, if you think that's impressive, with nothing more than words printed on the pages of an ordinary book that happens to say "Bible" on the front, and with nothing more than words spoken by an ordinary man like your pastor, the same Spirit keeps you clinging by faith to that cross through good times, tough times, and especially the sin-filled times of life.

Some people consider that kind of talk sacramental silliness. And if all you believe is what your eyes see, it is sacramental silliness. But we believe what God says. So to us who are being saved, it is the power of God and the wisdom of God. For 2000 years, our Lord has been using water, words, bread, and wine to say, "Christ crucified is for you." I need Christ crucified. Desperately. So if that's foolishness, I say, "Give us more foolishness!"

Sure the message of the cross is offensive. But believe it. Speak it. Rejoice in it every day of your life. It is wimpily weak, imbicilically foolish . . . and incredibly effective. Christ Crucified is God's power, God's wisdom, and your salvation.

Rev. Bruce Keseman is pastor of Christ Our Savior Lutheran Church in Freeburg, IL and a former member of the Higher Things Board of Directors. He preached this homily at the closing Divine Service at Crucified 2014 in Mequon, WI.