Foundations: Dying and Rising from Above 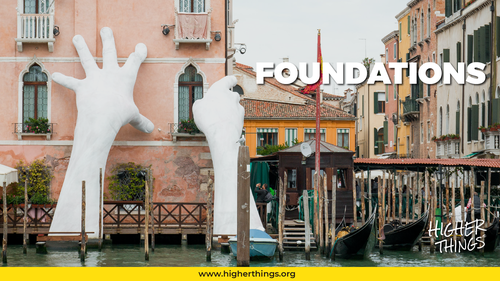 The purpose of a vaccine is to inoculate you against a disease. By putting some of the disease into your body (usually an "inert" version of the illness) your body reacts and builds antibodies against that disease. Then later on, when you are exposed to that particular germ, your body is ready with its defenses to fight off the disease. Baptism is just such an inoculation against death. When you are baptized—born "from above"—you are given the death and resurrection of Jesus as your own. That means the death He died for your sins you have died: at the font! And the life He lives, you now live, having risen to that new life through the waters of Baptism. And since you have His death and resurrection in Baptism, that means that when you die, death cannot keep you down; you will be raised up and live forever. You're inoculated against death!

Science and medicine continue to overcome illness and disease. Many sicknesses that would have surely caused death just decades ago are treatable or perhaps even curable. But the one thing we have found no physical pill for or vaccine against is death. You can cure a disease and treat some symptoms, but in the end, death will have its way. We might be able to use biology and chemistry to extend our lives, but we can’t keep death away forever. Plus, any kind of tragedy could strike at any time, ending someone's life. We don't like to talk about that. Everyone hopes they'll live a nice long life and die peacefully of old age in their sleep. But we know better. We've seen family and friends fall asleep in death. We've seen it happen to young and old. We've watched loved ones waste away with something that cannot be cured. We've known someone whose life was cut short by tragedy or accident. No, there is nothing in this world that can defeat death.

So the Enemy of death comes "from above" into this world: the Son of God in the flesh—Jesus, whose name means "Yahweh saves." Saves us from what? Saves us from our sins, the wages of which is death. Sin brings death, so Jesus takes on both. He takes on sin by suffering and dying for the sins of the world on the cross. He takes on death by taking a last breath and being laid in a tomb before coming out the third day and triumphing over death. When Jesus comes out of that tomb on Easter, something is different. Death no longer has the last word. It is the final enemy to be defeated, and on the Last Day when our bodies rise from the dead, then death will be done away with once and for all (1 Corinthians 15)—all because Jesus came out of that tomb after He paid for the sins of the world with His holy, precious blood and His innocent suffering and death.

Imagine there was a doctor somewhere who understood the art of saving people from death, or even though they died, could restore them quickly to life so that they would afterward live forever. Oh, how the world would pour in money like snow and rain. No one could find access to him because of the throng of the rich! But here in Baptism there is freely brought to everyone’s door such a treasure and medicine that it utterly destroys death and preserves all people alive. (Large Catechism IV.43)
The way that Baptism does this is described by St. Paul in Romans 6:

Or do you not know that as many of us as were baptized into Christ Jesus were baptized into His death? Therefore we were buried with Him through baptism into death, that just as Christ was raised from the dead by the glory of the Father, even so we also should walk in newness of life (Romans 6:3-4, NKJV).
Baptism is the water to which the Lord attaches His Word of promise: Christ died; you die. Christ rose; you will rise. The power of Holy Baptism is that it joins us to Christ's own death and resurrection. You have died at the holy font to inoculate you against your physical death some day. You have been raised to new life at the font so that you will rise from the dead on the Last Day and live forever.

This means that for those who are baptized into Christ, death is no big deal. That's right! No big deal. It might be sudden or lingering. It might be painful or peaceful. It will cause tears and grief. But know this: Even though you die, you will rise. The promise of Holy Baptism is that not only does your Old Adam die daily but the New man arises to live in righteousness, innocence and blessedness. This means that when you are confronted by death, you can mock it, scoff at it, shrug it off as no big deal. That's because just as much as Baptism prepares you for death, it also promises eternal life. Yes, you’ll die. Then you'll rise and live forever, because Jesus did. What He did is made yours by water, Word and Spirit from above.

So we live in a world surrounded by death, but we are vaccinated against it. We die and rise from above, in Christ, through the water and His Word. Therefore, we boldly confess, while sneering at death, that we believe in the resurrection of the body and life everlasting.